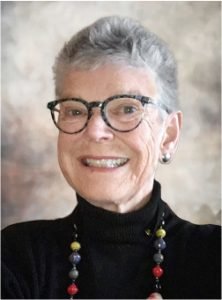 Born in Saskatoon, Saskatchewan to Clifford P. Hansen and Agnes Laurie McLean, Margaret grew up with her siblings Herman, Maren and Janet in a farming community in northern Manitoba. There, having learned to drive tractors, she decided she had the means to chase boys who had fast cars, played basketball, hockey and curled. Already with an eye on her future, early in her schooling she also took on extra classes in French and British history.

After declaring – we’re pretty sure not seriously – that she wanted a job where she “did not have to work”, she moved to Toronto to study Optometry. Four years later, she had received the Gold Medal for General Proficiency as well as several other academic and clinical awards, not exactly the achievements of work avoidance. She next set herself a longer term life goal: to marry the handsome, charming and debonair Roland (who may have written this part).

Initially, the newlyweds settled in Cornwall, but in short order moved to Ottawa, then east of the capital to Rockland and then back to Ottawa, developing not only their shared optometric practice, but also their family with the addition of three wonderful daughters. As the children grew, so too did the practice and, at the same time, her involvement in the community they now called home.

Margaret always had a travel bug, though, and early in her professional career she travelled to the James Bay region to supervise a vision clinic. At the same time, she was active in local politics and related issues, including work in the growing movements advocating equal pay for equal work, and the rights of indigenous women. As a result of her efforts, the first community clinic for mental health was established in Prescott Russell.

Not surprisingly, she was also extremely active in the political side of her chosen profession. With Roland’s encouragement, she was named as the Ontario Association of Optometrists (OAO)’s Councillor on the national Council of the Canadian Association of Optometrists (CAO). In that role, she eventually went on to become CAO’s first ever woman president. “I loved the challenge and felt fortunate to serve,” she explained.

She also urged other CAO members from coast to coast to get actively involved outside the confines of their examining rooms and dispensaries, to serve their profession and their communities.

But her role on CAO’s Council was not the end of her Association activities. For many years, she was an active member on the Board and the Awards Committee of the Canadian Optometric Education Trust Fund (COETF), the body through which a great many Optometry students, instructors and post-secondary candidates have been able to further their education and research. Eventually, after she retired from active practice, the COETF thanked her with the honour of a scholarship program in her name.

Margaret loved her patients, especially the challenging cases. But eventually, after 42 years, she decided it was time to retire, explaining – no doubt tongue in cheek – “It was interfering with my life.” What began as a second story walk up practice in a local strip mall had by now evolved into The Ottawa Optometric Clinic, now called “EyeDocs”, with six clinics across the capital region. As a farewell gift her former partners established in her and Roland’s names an award for Humanitarian Service that is given annually to a student at the University of Waterloo School of Optometry. Margaret always maintained they could not have received a more wonderful gift.

Other accolades earned during her long career included a further joint honour with life partner Roland: the Dr James Cobean award for service to the Ontario Association of Optometrists, as well as the CAO President’s Award, and an Outstanding Alumni Award from the University of Waterloo.

Retirement opened again for her the door labelled “travel” and she set out to take full advantage of – as she put it – Roland’s coat tails during his service with the World Council of Optometry (WCO) for whom he eventually became President. These times, she always said, were “an absolute delight”.

Roland, however, correctly sensed that her itch for community service was still something that needed to be scratched, and so he “strongly” suggested she consider membership in a local Rotary Club. Not one to do anything by halves, Margaret joined the Rotary Club of Ottawa, the Capital’s first ever service club, established in 1916.

While Margaret simply calls that service “rewarding”, family, friends and colleagues probably wished she just would have gone quietly into full retirement because suddenly they found themselves having their arms twisted (gently, but never taking no for an answer) for everything from billeting visitors from all over the country who came to the capital under the Club’s annual Adventures in Citizenship program, which she chaired, or international high schoolers in the Rotary Youth Exchange Program, or simply lending support to countless Rotary projects all around the world.

Following her familiar life pattern, Margaret became the first ever woman president of the Rotary Club of Ottawa, and Chairman of the Board of the Club-built Rotary Home. As a result of these many avenues of service, the entire des Groseilliers family to this day has a worldwide web of lifelong friends they first met as energetic teenagers and who have now grown into marrying and having families of their own.

For many years, the family centre during spring, summer and fall was Margaret and Roland’s condo at Presqu’ile Island on the Ottawa River, where they regularly hosted family, friends and Rotary events at the Lodge. In winter, the life of a “snowbird” called and they travelled across the US and Canada with their newly acquired dogs to their winter home in Tubac, Arizona. There, Margaret learned to cook “southwest”, drink margaritas, go cycling, hiking, take frequent day trips to Mexico for lunch and haircuts, and launch more substantial travel adventures with Roland to India, Costa Rica and southwest Asia. While in Tubac, she also found the time for courses offered by the University of Arizona on subjects as diverse as American Foreign Policy seminars, the films of Stanley Kubrick, Geology, Water Use in the state and US Dialects, where she said she brought a Canadian’s perspective… eh?

And – big surprise – she became a regular “Visiting Rotarian” in the local Club, which Roland also joined as a member. In short order, she was an active participant in an “End Polio Now” campaign in Hermosillo, Mexico. Then, when friends were establishing a Produce Pantry to distribute free produce to people in the local area, she lent a hand (as well as, to Roland’s surprise, his truck), a project that was a great success and lots of fun.

Eventually, she was forced by health issues to slow down, a time during which she was always tirelessly supported by family, friends and her medical team.

When Margaret received the diagnosis of the cancer that ultimately took her, she accepted it in the same way she had lived her entire life – with an inner strength, a determined resolve to stay cheerful and an unmatched grace.

Her final message to family, friends and colleagues is a simple request: “Please don’t dwell on my leaving. Instead, think about the happy times we shared; plant a tree in my memory; enjoy a Three Rivers Cocktail; serve your community in the best way you can and, if you are fortunate enough to do so, choose your own final adventure at the end of this long and wonderful road called life.”

Memorial Donations can be made to the Canadian Optometric Education Trust Fund (COETF); The Ottawa Rotary Home Foundation; The Rotary Club of Ottawa Children’s Foundation; the University of Waterloo Alumni Fund or (said with a smile) why not all of them?

To send a message of condolences, please read the instructions below. To notify the family that a donation has been completed, please use the “Donations” tab above.