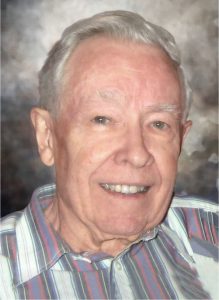 Due to the current circumstances, a Funeral Service will be held at a later date at St-Victor Church, Alfred, Ontario.

It is with sadness that we announce the passing of Jean-Marie ‘‘John’’ Trudeau of Hawkesbury, formerly of Orleans, Ontario, on Thursday, December 24, 2020, at the age of 89.  Beloved husband of the late Rollande Desjardins.  Dear son of the late Ernest Trudeau and the late Stella Joly. Loving father of Christine (Jacques Bouvier) and the late Richard (Wendy Banks).  Cherished grandfather of Stéphanie Isabelle Brunet (Nicholas-James Clavet) and Leigha Warneke. Also survived by brothers-in-law, sisters-in-law, nieces and nephews.

John served several years for the Royal Canadian Air Force as a pilot.  Following his military career, he continued with the Federal Government as an Air Canada Pilots’ inspector for Transport Canada.

Due to the current circumstances, a Funeral Service will be held at a later date at St. Victor Church, Alfred, Ontario.

Special thanks to the staff of McGill Manor, Hawkesbury, to Dr. Di Cintio and to the nursing staff, Marc and Joël from the Champlain LIHN for their compassion and devoted care provided to Jean-Marie.

For those who wish, donations to the Cornwall and district Alzheimer Society, P.O. box 1852, Cornwall, Ontario, K6H 6N6 and/or to the Ottawa Regional Cancer Foundation, 1500 Alta Vista Drive, Ottawa, Ontario, K1G 3Y9, would be appreciated.