Five generations of the Lamarre family serving the surrounding communities.

The Lamarre family has been serving bereaved families in the region for five generations since 1875, when Cyprien Lamarre moved to Bourget.

Under the name of Lamarre & Son Funeral Home, Gilles Lamarre and his son Luc continue the family business, started in Alfred by Télesphore Lamarre in 1924.

Cyprien was a pioneer of the art in this part of the country. He initially settled in 1875 in Bourget, a small town that was then called “The Brook”. He was young when he arrived in Lower Canada, and it was probably the local needs and circumstances that led him into this activity.

Later, in 1924, his son Télesphore, who had followed in his footsteps, decided to settle in Alfred and founded the business that was afterwards inherited by his son Léon. Gilles and Luc, son and grandson of Léon, are still there today and serving the surrounding community. Cyprien Lamarre was also a pioneer in another field, being among the first group of undertaker businesses to have taken a course in embalming in Montréal in 1900. For his part, Télesphore obtained his funeral director’s license in 1928.

More than 14 decades have passed since the founding of the company and many things have now changed.

The practise until about 1940 was to expose the deceased at home, but then funeral homes came into use. The Lamarre Home was quick to open a Funeral Home in Alfred. At that time, Léon obtained his diploma from the Board of Examiners of Toronto and came in at the top of the class. While pursuing his career as a funeral director, Léon Lamarre was following several other activities, as Town Clerk of the village of Alfred for 14 years, and as Secretary of the Hydroelectric Commission for 25 years. He was also a school commissioner for 15 years and a member of the parish choir for a quarter century.

In 1960, the company built a brand new funeral establishment, larger and more up to date to meet the population’s needs. As a result, from 1970 the people of Alfred and the surrounding communities were served from two locations, in Alfred and in Plantagenet.

Léon Lamarre passed away on November 9, 2010, at the age of 95 years, still holding his funeral director license, with emeritus status. This status is granted to persons having held a license without interruption for fifty years or more. Gilles and Luc have now taken over. Gilles obtained his diploma in 1967 from the Canadian School of Embalming in Toronto.

For his part, Luc obtained a Diploma in Administration from the University of Ottawa and another Diploma in Funeral Services Education from Cambrian College in Sudbury, and he obtained his funeral director’s license in 1995. Luc represents the fifth generation to operate the family business. The Lamarre family is proud of its roots and legacy of values handed down from generation to generation.  So, five generations followed one another for a period of more than 140 years.

The pride and reputation of Lamarre & Son Funeral Home is rooted in many years of service within the surrounding community. 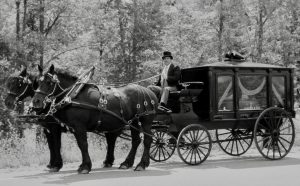